Forget worries about the election, this graph perfectly illustrates what ought to be keeping the typical buy-and-hold investor up at night. Central bank monetary policy on steroids has again goosed asset prices to the land of unicorns and rainbows.

This is precisely why I continue to take a defensive (tactical) approach to managing client portfolios. Reasonable investment returns can be sought when assets can once again be bought at more reasonable levels. In the current environment, most investors (and the financial industry) are just picking up nickels in front of a steam roller. 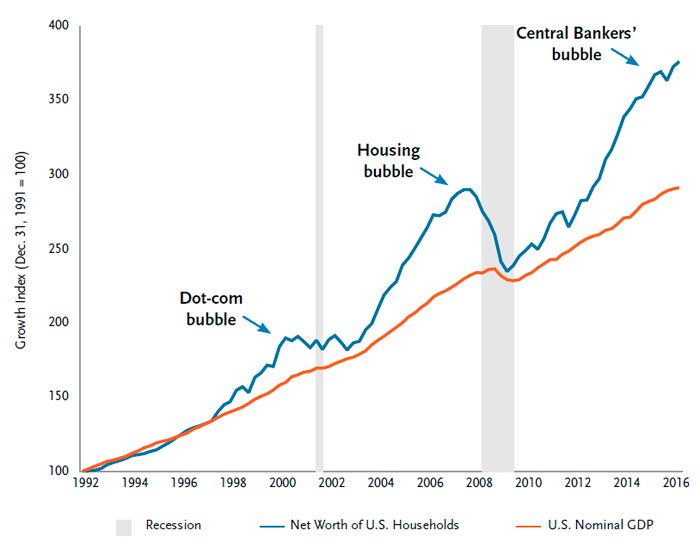 In aggregate, US household net worth can (and does) diverge from underlying economic growth for extended periods. But they’re tethered in some fashion.

Our wealth can’t do a permanent moon-shot while the economy’s only on a modest lift-off.

Now, this doesn’t mean prices are going to crash this week, this month, or even next year. It just means we’re in an unsustainable situation and overdue for a healthy correction. The correction might come with a crash, or a series of pullbacks and advances, or “growing into” the overpriced assets (unlikely in my view), or some combination.

From this high watermark valuation, I think buy-and-hold investors are likely to see very poor average annual returns over the next 7 to 10 years. Even worse if they bail out after their investments have tanked from the inevitable downturns (which is exactly what the studies show investors do over and over and over).

Far better, I think, to take a more defensive approach in advance when assets are so clearly overpriced.

I have issues with GDP (see below*) too because it’s consumption-oriented and largely ignores the important debt side of the equation. But any similar benchmark for economic growth is going to yield largely the same result.

That’s true. Net worth is assets minus the debt owing on those assets. So if we were measuring asset prices alone, the picture would likely be even worse.

Fair enough, it would be interesting to see results from further back. On the other hand, it’s only been in the last couple of decades or so that central banks have become much more activistic, interfering with normal market prices. Arguably, in some respects we don’t even have real markets right now.

If you're a SecondHalf discretionary management client reading this, rest assured that I'm playing defense on your behalf. But as always, happy to chat with you about your portfolio if you'd like.

If you're not yet a SecondHalf client and are concerned about your investment portfolio, feel free to get in touch and let's talk about your situation.

* My problem with GDP: it's too consumption-oriented and largely ignores the debt side of the equation. The US government could sell bonds and borrow $250 million, then hire 5,000 employees and pay them $24 per hour, 40 hours per week, to spit at the moon for one year. That would add $250 million to US GDP that year! We need a better benchmark to measure improvements in wealth and productivity, but GDP is what we have for now and some variation of it is used by most of the world's major economies.