It’s been quite a while since my last post, so I thought I’d share a few comments on recent market and economic developments.

The below charts should help you to understand the stock market and economic developments from the past months.

Lots of talk in the financial media that 2019-Q1 had the best first quarter US stock market performance in over 20 years, check out the examples here and here.

And here’s a price chart of the S&P500 for the first quarter. Pretty impressive, right?

I guess I’ll never quite understand society’s insatiable appetite for marginally-useful statistics (in sports, markets, etc). I suppose it grabs our attention, so the copywriters and advertisers are doing an effective job. But how about let’s add just one more quarter to the chart and take a look?

Completely different story, right? The six months started and ended in pretty much the same territory.

I think the real story here is not a phenomenal stock market performance in Q1 (which is technically true). Rather, it’s how we have yet another example of a rapid “V” recovery whenever the stock market takes a tumble.

The Federal Reserve’s total about-face on planned interest rate hikes surely is a contributing factor. Correspondingly, for the past 10 years investors have been immersed in Pavlovian conditioning that all is well, the Fed has our back, and let’s just go for it. There’s a significant swath of investors and portfolio managers who’ve never yet faced a serious, sustained downturn like 2000-2002 and 2007-2009.

I suspect we’re going to continue to have these rapid “V” stock price recoveries until the psychology breaks with a healthy cleansing in the markets. Which is looking like it probably won’t happen until the next recession, which brings me to….

In recent months, the US bond yield curve has inverted a bit. What does that mean?

Well, it means that potentially an economic recession is around the corner.

But in an inverted yield curve environment, the shorter-term debt has a higher yield than longer-term debt. Particular attention is given to the relationship of 3-month Treasury Bills to 10-year Treasury Bonds. The Cleveland Federal Reserve indicates that a 3MO/10Y inversion has preceded the last seven recessions.

Here’s a chart from GuruFocus of how things stood recently. Note that the 3-month yield is slightly higher than the 10-year yield. 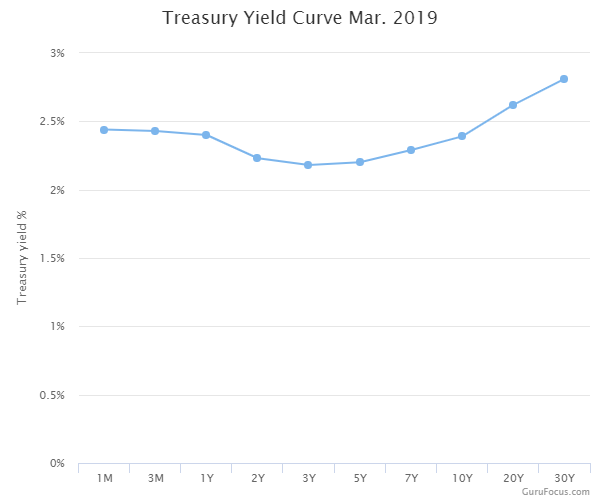 Is it a foregone conclusion that recession is coming? No, there’ve been a few false positives (only a few). And it can take months before recession fully takes hold. We haven’t had one in 10 years and in my view are “overdue” in some respects. On the other hand, global central banks have been activistic in recent years with their monetary policy on steroids and nobody knows if that may have “moved the goal posts” with respect to certain economic measures and indicators.

Per usual, we can expect the Federal Reserve to attempt to stave off an economic downturn or at least mute the effects—which suggests their recent about-face on raising interest rates means they see storm clouds on the horizon.

And recession talk parlays nicely into another topic that’s been getting a lot of press over the last six months….

It’s beyond the scope of this post to wade into the weeds on the details of MMT, plus there are learned folks on all sides of the theory who’ve already done so. Read these links if you’re interested in Wikipedia’s explanation, a pro-MMT explanation (and resources), and a critique of MMT). But I do want to share some concerns I have.

From what I’ve read on MMT, proponents seem to do a better job than many (most?) economists in understanding and explaining how our modern financial system actually works. In a nutshell, MMT says that any sovereign government that issues its own currency is essentially not financially constrained in how much it can spend on the programs and priorities of its citizens. That government can never run out of money for programs, it can just create more. True enough on the face of it.

The two significant potential problems I see are: inflation and political/human nature.

What about high inflation? Whenever you throw a lot of money at a problem, the affordability constraint gets removed and you get rising prices. Think about the sectors where prices have risen the most in the last 10+ years.

The cost of college education has skyrocketed. Lots of contributing factors I’m sure, but the biggest is the (largely) unconstrained availability of student loans. Education debt in the US now totals around $1.5 trillion (yes, Trillion!), up from only about half that level a mere 10 years ago.

Medical expense and health insurance costs continue to skyrocket as well. Never mind how you might feel about Obamacare and what it did or didn’t do, the totality of the US medical system needs a giant enema. And in my view, we’ll never see manageable costs until constrained funding (personal, business, government) forces the issue at all levels of the healthcare system.

After the last two financial crises, the Federal Reserve and other global central banks implemented monetary policy on steroids. The result was inflation, not in goods and services but rather in financial assets and real estate. And those prices are again in “bubble” territory.

It seems to me that largely unconstrained government funding available via MMT policies, by definition, would reach some tipping point at which inflation begins to eat away at affordability (and the flip side: purchasing power of the nation’s currency). Mind you, I’ve yet to see any MMT proponents satisfactorily explain where that tipping point actually may lie. But in fairness, nobody on any side of the issue can truly answer that because there are just too many variables.

I’m not going to try to predict when, but I fully expect MMT to increasingly take hold in the US. This is a reflection on lessons I painfully learned flowing out of the last financial crisis. Namely, human nature will always take the easiest path that results in the least current amount of pain. Human nature will always kick the can down the road for someone else to deal with, if possible. Human nature won't deal with tough issues until their back is against the wall, and even then it'll be minimally dealt with kicking and screaming the whole way. Government and central banks are nothing but human nature writ large. So thinking about MMT, what politician can possibly resist a green light to increase spending for their constituents and their political party’s priorities? MMT gives them the political and “intellectual” cover to do so.

The Tax Policy Center estimates that 44% of US households paid no income tax in 2018. It’s also estimated that now more than half of US households receive assistance from one or more government programs. When half the country has a vested interest like that, what’s the likelihood they’ll vote for those politicians who support opening the coffers and promising jobs for everyone, "free" healthcare for everyone, "free" college for everyone, and so on? Of course, the political animal will glom on to whatever belief system or economic philosophy that advances it.

Tying It All Together

If MMT does take hold, it will be interesting to see if that further “moves the goalposts” on traditional economic measures and indicators. Is it possible that economic recession could be temporarily averted (or we pull out of shallow recession once in) by an MMT-style sustained stomp on the gas of federal spending, thereby kicking the can further down the road? And if we get high inflation, which tactical portfolio management strategies might serve best to help investors retain purchasing power while avoiding permanent capital loss?

Nobody has all the answers, but these are the right kinds of questions for us to be asking. As always, I’ll be monitoring these developments closely.

Do you have any more questions about the market or financial questions in general? Feel free to reach out!